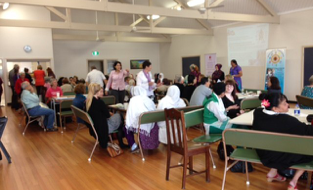 Proceedings were opened by Wurrundjeri elder Aunty Dianne Kerr who gave a brief account of her background and the background of her people who have inhabited the region of Dandenong for over 40,000 years. She talked of drugs and alcohol abuse and domestic violence amongst her people; racially motivated violence in the streets and the desire that positive action needed to be taken to tackle these related issues. “If the men cannot do something about these issues then women need to tackle them” she declared. She also applauded all these

women’s organisations for coming together and making an impact on society in general. Women united for change.

The stage was handled by Jamel Kaur Singh assisted by Fatima Batool from the Hazara Muslim community. Fatima has only recently studied English and relished the opportunity of speaking in English in front of an audience.

Jessiee Kaur Singh, President of WIN Foundation thanked Aunty Di and presented her with a gift basket for her people.

Faith representatives were then requested to offer a short prayer each from the women’s perspective or acceptance of all regardless of religion, faith, belief or gender, from their backgrounds.

Prayers were offered as follows:

Sikh – Sister Amrit Kaur
Auntie Roz Blades – Jewish
Zahra Hasani – Islam
Marian van Enst – Budhist
Aunty Sarita – Hinduism
Princess Andi representing the Fijian Women’s Group rounded off the prayer offerings by a prayer to Jehovah and Jesus His son invoking their blessings for all present and their aspirations for peace and harmony without prejudice to anyone.

Prayers were requested from the floor and a prayer was offered for all by Pastor Katie Kapao from Dream Alive Church representative of the Cook Island Women’s Foundation.

A gentleman from the Indian Retirees Organization offered that change towards accepting each other as equals must come from within each of us.

Melba Marginson, originally from the Philippines, introduced the aspirations of the VIRWC – “Women”, she said, “are going to change Australia”.

Zahra from the Hazara Women’s Friendship Network introduced her organization and its aspirations. She explained that time had come for her organization not only to help women from her own community but also reach out to women beyond her community.

Jamel representing WIN Foundation thanked all the menfolk who supported these women’s organisations and talked of the roots of WIN Foundation starting at Barmah Forest, Cummeragunja with Aunty Walda Blow and the Yorta Yorta women.

Auntie Alia Sultana, Vice President of the Hazara Women’s Organisation welcomed all and said she was pleased that their organization had the opportunity to be a part of this women’s interfaith event and looked forward to more such meetings and greater interaction with other womens organisations.

Roz Blades – Paperbark Ward Councillor, talked of the changing face of the people of the Greater Dandenong region. Importance of education amongst the migrant women in the region. Need for greater interaction amongst the womenfolk in the region. Embrace change. Not procrastination and talk, but active affirmative action to see change in every aspect of life and all sorts of services including child care to aged care, health education and interactive bodies amongst the various communities.

Sarita from the IRWC – started with a short simple exercise session. Introduced Amara, a councilor from Monash. Sarita introduced some aspects of Mindfulness and Well-Being like greater awareness of our environment and being in the present moment rather than be lost in thoughts either about the past or the future all the time. ‘We must become the change we want to see’. Change from within first and the outside will also change.

An interactive group session was encouraged with the questions below as starting points.

Where do we want to go?
Where do we see our future heading? How do we get there?

Each group was requested for one or two points each. The outcome was:

Maintaining existing relationships and greater acceptance.
To be more connected and involved with younger people
Women must get into positions of power to help change
Educate mothers and you will have an educated nation.
Greater multifaith interaction. Greater understanding of each others way of life Social media – communication

Respect for others and our selves.
Empowerment for girl, mother, sister, wife, granny. Greater sharing
More women involved in councils and government Greater voice for women.

Another young lady who has only recently started to learn English, Seetara Razaee, then spoke of peace and what peace means to different people. She spoke of freedom from oppression, freedom to study, freedom to live life as one wishes to, freedom from fear, freedom from being discriminated against and even killed for being a woman, as prerequisites for peace.

A further group dialogue was encouraged for ‘Actions that we can do, back in our neighbourhoods’.

Open greater opportunities to talk to each other
Future generations must see us change – we need to be the change
Women in very good position right now in this world to affect change – time has come. Napolean – Give me good mothers and I will give you a good nation.
Use our lucky position to word fight for our sisters in countries where they are being suppressed.
Go out of our ways to thank those who are doing good and encourage them further. Multicultural BBQ’s. More Leadership training for women.
Constant, regular communication.
For each individual to make it their duty/responsibility of knowing all four neighbours.

Women from Mornington region wish to do more with women from greater Dandenong.

Jessiee thanked all for attending, and by coming acknowledging the need for affirmative action by women towards peace and harmony.

Jamel Kaur Singh was commended for her fluent synopses of each speaker adding clarity to the occasion and ensuring that the proceedings went smoothly and on time.

Thank you Brother Apwee who allowed the use of the church premises. Br. Apwee led the concluding prayer followed by a Multichant by Jamel.

International Women’s Day was celebrated by over 100 women and some men from 10.30am to 1pm followed by a vegetarian lunch prepared by the Afghan-Pakistani Hazara ladies. Attending were women from very diverse backgrounds namely Aboriginal background, various denominations of the Christian faith, members of orthodox and progressive Judaism, Humanists, Muslims from different countries and a variety of denominations namely Sunni, Shiite, Ahmedias and also Hazaras, Hindus, Buddhists, members of the Bahai faith, atheists and Sikhs.

The session ended by networking amongst attendees for future action and future such gatherings which everyone felt were very beneficial truly lending to the slogan – Unity within Diversity.