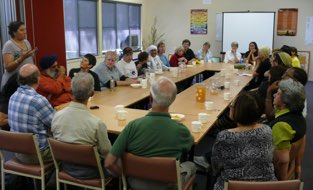 On March 28, 2012, nearly 30 people set off together for a retreat to Barmah Forest in NSW, hosted by Elders of the Indigenous Nation of the land, the Yorta Yorta People.

In 2 mini-busses and a Tarago, we got off to an early start. Our first stop on the way was at the Sikh Gurudwara in Craigieburn. There we were invited to hear the reading of the day from the Sikh holy book, the Guru Granth Sahib. We also were treated to a morning tea of traditional Chai and some sweet snacks.

The weather was glorious as we piled back onto the busses, heading for our next stop in Shepparton, to pick up Yorta Yorta Elder, Alf Turner, aka Uncle Boydie , grandson of William Cooper. Another hour on the road and we finally arrived at the Community Centre at Barmah Forest.

After warm welcomes, cups of tea and some discussion, we headed to Cummeragunja Cemetery, for a peaceful walk around to pay our respects quietly to the Elders buried there. Some of the great people known to the white community who rest in that place are Pastor Sir Douglas Nicholls, Uncle William Cooper, whom we were to honour the next day, and Aunty Margaret Tucker.

Next we traveled to our beautiful cabins, right on the Murray River bank in Moama, where we spent some time settling in and meeting the folk we had not met on our busses. Some sensible people had brought bathers and advantage of the heat, by taking a swim in the pool. I looked at the winter coat in my bag and realized that I had not done my homework on the weather!

Our evening was spent back at the Indigenous Community Centre in Barmah Forest. Our tireless Project Officer, Jamel Kaur and her husband, Andrew, cooked up a storm for our participants and many members of the local community, which included lots of vegetarian dishes, but also kangaroo steaks and beef sausages.

When our tummies were happy, our Indigenous hosts showed us a movie entitled, “Lousy Little Sixpence.” The movie was made by local people to tell others about the history of the local Indigenous People since white settlement and the experiences of the stolen children, their enslavement to white masters as either domestic servants, (girls), or stock handlers and shearers, (boys). The law required that Aborigine children were only educated to grade 3. At age 12 – 13, they were removed from their parents. Girls were sent to the city to be trained as domestic servants. Boys were used as farm hands/ stock handlers.

The title of the movie refers to the money that they were supposed to receive for working 14 hours a day, 7 days a week. They were entitled to one shilling and sixpence per week. However, the Government said that they were insufficiently responsible with money to take their wages. So the Government said that they would save one shilling per week from their wages for them. This money was never returned. The employer, (slave owner), was meant to put the sixpence in their hands. This did not happen either.

Generations of Indigenous children have been stolen from their families, removed to places very far away, and put into situations of slave labour. Many of the girls were raped by their employers, creating more mixed race children for the authorities to steal.

The acts that we learned about in the film were the work of the “Aboriginal Protection Board”. They should have been really been called the “Aboriginal Annihilation Board.” Their stated aim was to remove Aboriginal and mixed race children from their families and culture. The aim was the destruction of Indigenous culture, considered so inferior by the ignorant and arrogant whites.

The movie left us in a somber and thoughtful mood. We sat around and talked for some time after the film, shared some more tea and eventually headed back to our cabins by the river.

In the morning, many of us joined Uncle Reg Blow in a walk down to the river bank, where he told us some stories and we shared in. He emphasized the importance of story telling in the education of Indigenous children, and how the stories carry a moral or a message about how to behave. As it was only days since the river had been flooded, the bank was too slippery and muddy for walking along.

After breakfast we headed back to the Cumeragunja Cemetery, for the major event of our visit. Today was the 29th March, the 71st anniversary of the passing of revered Elder, William Cooper. William Cooper,(1861-1941) born to Yorta Yorta woman Kitty Cooper and James Cooper, a white labourer, grew up at Maloga, an Aboriginal Mission on the Murray. He was very bright and learned to read very quickly. Later he read widely in matters of Indigenous Rights, particularly in the USA and New Zealand. Cooper became a strong advocate for Indigenous Rights, petitioning both the parliament and the King for Aboriginal Representation in the Australian Parliament, Citizenship and the Vote and Land Rights.* Sadly, he did not live to see these things come to fruition, as it took another 26 years after his passing.

William Cooper is not only a hero to his own people, but to Australia’s Jewish people as well. On December 6, 1938, he led a delegation from the Australian Aboriginal League, an organization that he founded, on a walk from his home in Footscray, to the German Consulate in Melbourne. There they delivered a petition to the Consulate condemning “the cruel persecution of the Jewish people by the Nazi Government of Germany. The protest has been referred to as the “only private protest against the Germans following Kristallnacht.” *

William Cooper was a great man who sought human rights for his own people, but who was also able to identify with the suffering of others on the other side of the world, and stand up for them.

Uncle Reg Blow began the ceremony by cleansing people with smoke as they entered the cemetery. He asked us to close our eyes while he set the spiritual tone by playing his didgeridoo. Prayers were said from many faiths in order to honour the memory of William Cooper. Several councilors from Murray Shire were in attendance, and the Deputy Mayor gave a moving speech about learning about the great people who are buried at Cummeragunja.

There was one more trip to the Community Centre where we ate another wonderful lunch cooked up by Jamel and Andrew. Jamel had also painted an image or a turtle on a canvas, and each participant put read or green paint on their hands, and placed a handprint on the picture. This became a gift from the participants on the retreat to the Yorta Yorta Elders. Thank you speeches were made, gifts exchanged, cleaning up and dishes done, before the long trek back to Melbourne.

As you read this report, please click on the photos so capably taken by Brigid O’Carroll Walsh, as her photos tell the story in pictures.

Finally, I would like to thank all of the wonderful people who made this event possible through their vision, hard work and contributions on the days. I will list them and pray that I have not forgotten anyone. Please forgive me if I accidentally miss you out.

Rachel Shields: Song woman who sang so beautifully at the cemetery,

Avraham Schwarz: Person who has done the most in the white community to tell about William Cooper’s achievements and greatness. Giver of a Jewish prayer at the cemetery. Bus driver.

Eva Wonderful Austrian tour guide, who volunteered to be one of our bus drivers.

Achievements: Our achievements were many. We brought people from many nationalities, different religious and cultural backgrounds who had come with open minds and hearts to learn more about others and to pay their respects to the wise and beautiful Yorta Yorta Elders, past and present. We were not just mouthing those words, but living them for two days.

We also raised the consciousness of people from the local shire council, of the many great Indigenous Leaders who are buried at Cummeragunja. They came with genuine interest, humility and a new sense of connectedness to the Indigenous Nation that lives in their shire. The also provided a donation of $1000 towards a clean up of the cemetery, which is prone to Bindi Grass weeds that carry nasty prickles.

Finally we need to thank the Creator of the Universe, whichever name you have for this divine force of life, who blessed our journeys with safety and whose spirit permeated the people and events.